Making a mug- from ball of clay to cup of tea from Michelle Lowe on Vimeo.

I make my work by hand in my small workshop using traditional slipware pottery techniques. I use red earthenware clay (terracotta).

I love throwing and I make most of my work on a potters wheel. I also make some pieces including tiles and rectangular platters by rolling out slabs of clay.

I decorate the pieces using coloured slips (liquid white clay which I mix with oxides and stains to add colour).

The slip is applied to the pots by pouring, brushing, sponging or trailing (using a slip trailer). These different techniques create different thicknesses of slip which alter the texture and colour.

Once the decorated pots are dry they are then biscuit fired to 1000ºC. After 28 hours they can be removed from the kiln and I glaze them with a transparent or translucent glaze. I then fire them again them in a hotter glaze firing with a top temperature of 1130ºC.

I was introduced to pottery at school and instantly loved it. I studied at Wimbledon School of Art for an art foundation course and then pursued pottery part-time alongside studying social anthropology at Edinburgh University and working for a decade for social justice and human rights organisations in Scotland and in South America.

In 2006 I  learnt a huge amount by working as a summer assistant to Barbel Dister at Cromarty Pottery. I then returned to work as her apprentice.

I returned to Edinburgh and spent a few years potting part-time based at Gorgie City Farm. I then took the leap into setting up my own pottery in December 2012.

I now make pots full-time from my workshop at my home in Edinburgh.

I have also worked with and learned from a few other inspiring potters including Niek Hoogland and Pim Van Huisseling, Josie Walter and Maureen Minchin. 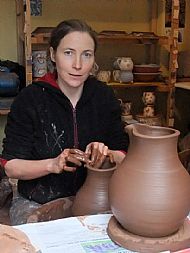 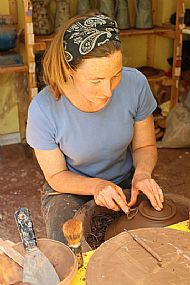 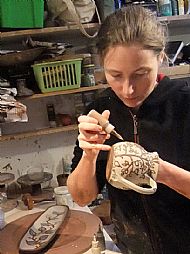